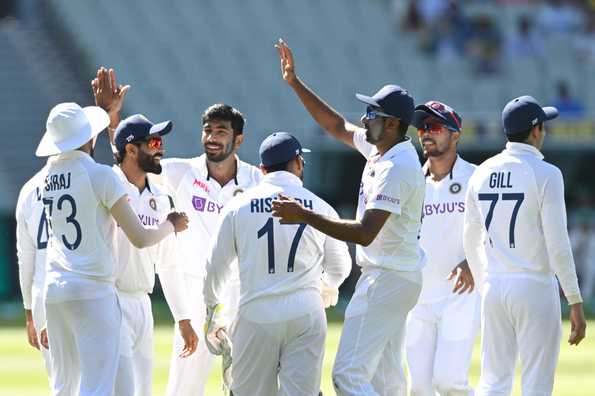 Tweet to @prat1204 to get featured on the blog. Please refresh for new updates!

Australia’s day, but only by so much. They left runs in the middle against a very inexperienced attack on perhaps the best batting pitch of the series, but a lot of it was down to India and their discipline. The visitors though let it slip a little with the second new ball; that after they had dismissed Marnus Labuschagne on the back of his fifth Test hundred. Two dropped catches (Labuschagne and Green) didn’t help but Australia haven’t run away in this first innings. Join us tomorrow to see where Tim Paine and Cameron Green can take them to. Bye!

Labuschagne falls after his hundred

Misjudges this short ball from T Natarajan and miscues this towards leg gully, where Pant runs across to take the catch. Another breakthrough for India coming at a crucial time. Labuschagne was looking to hit a shot every ball and falls by the sword, albeit after scoring a fair amount of runs. But he will feel he left some in the middle.

T Natarajan has his maiden Test wicket. Doesn’t even celebrate, and it took Rohit Sharma’s energy to induce some form of celebration there. Wade splices this pull shot, nearly a collision at the bowler’s end but Shardul Thakur manages to outdo his Mumbai teammate Prithvi Shaw. Also lets out a “what was that?” gesture.

A drive through the covers and Labuschagne has his fifth Test match hundred. Clearly likes batting at his home ground, and only fair there’s Shane Warne on commentary. Fair to say that this isn’t India’s best bowling line-up but he’s played the hand he’s been dealt, and he’s done it well.

Thakur has been expensive today

20 runs in the three overs he bowled in the middle session. His three maidens came in the morning session, and he’s looked out of wits with this old ball that’s not swinging much. He’s also tried bowling short but has cost his team some runs.

Australia looking set for the evening…

It looked like their afternoon when Steve Smith fell to yet another leg trap set by India, until minutes later, Navdeep Saini was clutching his thigh and hobbling off the field. It was mostly Australia after that, driving and pulling with much more conviction as Marnus Labuschagne would embody en route to his unbeaten half-century.

Australia ended the session having added 89 runs for the loss of just one wicket, which looked like a far cry when Smith clipped a full delivery straight to Rohit Sharma at mid-wicket early into the session. But Labuschagne’s dropped catch by Rahane upended the session a bit and India will have their task cut out in the last session of the day.

Labuschagne has a fifty

He’s been lucky but he’s been solid too. The highest run-scorer in this series for a reason and he raises another fifty with a clip into the leg side.

Saini is down on the ground after that dropped catch and is going off the field. He’s not limping but striding out of the ground, so the issue doesn’t seem that serious. Rohit Sharma will complete the over.

Rahane at gully is surprised by the pace and bounce on that ball, just like Labuschagne himself. Flies off the outside edge, good catching height, Rahane gets two hands on his right to this and it’s down. This pitch has quickened up, so expect India to pack up the cordon.

Some tight overs from Siraj and Saini to Smith in the lead-up to that wicket. Washington Sundar comes on for a fresh spell and picks him first ball for his maiden Test wicket. (He’s yet to concede a run.) Smith’s distraught after being caught by Rohit Sharma at midwicket but India had a plan in place there, asking him to hit through a packed leg-side.

It was a much better morning than anticipated for India who were without their two best bowlers in Ashwin and Bumrah. It didn’t help that Rahane lost another toss, meaning a bowling attack featuring two debutants in T Natarajan and Washington Sundar, with a total experience of only four Tests, was up against Australia at their strongest home venue.

That the hosts went into the Lunch break at 65 for 2 was down to a couple of early strikes and a whole lot of discipline from India. Mohammed Siraj, bowling from over the wicket, had David Warner edging behind in the first over of the game, and it took a superb diving catch from Rohit Sharma at second slip to send the opener back. Thakur then resumed his short 10-ball one-Test career with a wicket off his first delivery in this match. Marcus Harris here was guilty of playing a swinging delivery too much in front and miscuing it straight to short leg.

India up against Smith, Labuschagne

Shardul’s bowling nice and full but he’s unable to control the swing on a number of occasions. And all that’s playing right into the hands of Smith who’s hit a few crisp boundaries already. The best of the lot was a drive through the covers. Mohammed Siraj has come back for a second spell but no signs of Navdeep Saini yet in the first 18 overs of the innings.

Bit of swing, Marcus Harris plays well in front with no feet and miscues it straight to square leg. A good return to Test cricket for Shardul Thakur after that infamous injury-marred debut that lasted only 10 balls.

Steve Smith now joins Marnus Labuschagne in the middle. This will be a fascinating few minutes.

And Warner is out already

Only the sixth ball of the first over and Mohammed Siraj is celebrating already. It’s David Warner after all, edging behind and walking back at the fast-scoring Gabba. And most of it is thanks to Rohit Sharma who dives in front of the first slip and takes a low catch. That was never carrying…

All that moments after Nathan Lyon got a guard of honour from his teammates in his 100th Test.

Tim Paine wins an important toss and Australia will bat first at the Gabba. No R Ashwin (back spasm) and Jasprit Bumrah (mild strain) for India, who also bring in Shardul Thakur and Mayank Agarwal to make up for the injured players.

T Natarajan and Washington Sundar have been handed their caps by Bharat Arun and R Ashwin respectively. What a moment for these two.

The tour is on its last legs, and so is the Indian team in Brisbane. Ravindra Jadeja and Hanuma Vihari are the latest players unavailable to them through injuries and whether Jasprit Bumrah and Ravichandran Ashwin, their two best bowlers this series, make it at all for this fourth and final Test is still a mystery. In any case, they have Mayank Agarwal, Prithvi Shaw, T Natarajan, Wriddhiman Saha and Kuldeep Yadav to pick from.

It won’t be easy against Australia in Brisbane, where the hosts have been unbeaten since 1988, but this Indian team will be up for a fight. That’s one takeaway from this series that is going to stay with Indian cricket in the years to come. Irrespective of the result of this Test match. Anyway, all they need is a draw here to retain the Border-Gavaskar Trophy.

For Australia, Nathan Lyon is playing his 100th Test but he’ll want to wait to have a bowl; the hosts must have a tired bowling attack after the epic draw in Sydney. Will Pucovski has been ruled out with a shoulder injury and Marcus Harris will be replacing him in the side. Catch up on our full match preview here.

T.I. and Tiny Accused of Sexual Abuse and Assault