TORONTO —
Police broke up large gatherings connected to an anti-lockdown demonstration in downtown Toronto on Saturday and arrested the organizers as authorities step up enforcement of gathering restrictions and the provincial stay-at-home order.

Videos posted on social media show hundreds of demonstrators marching through the streets, condemning public health measures and denouncing the COVID-19 pandemic. The protest, which has been happening weekly since the fall, is in contravention with the new restrictions prohibiting outdoor public gatherings and social gatherings of more than five people. 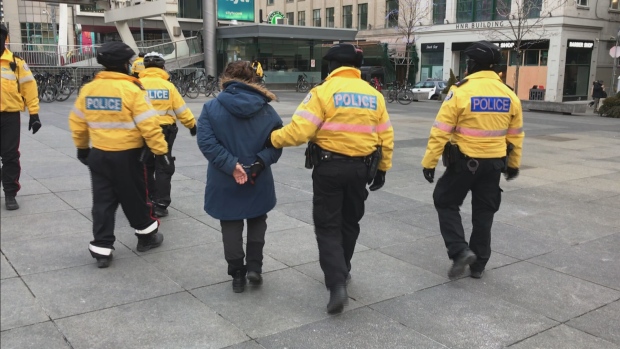 “At this time we can confirm that the Toronto Police Service dispersed crowds at two large gatherings,” Toronto police Const. Karoline de Kloet said in e-mail to CP24.

Video captured at Yonge-Dundas Square by CTV News Toronto appears to show police taking several protesters away with at least one person in handcuffs.

The gathering limit came into effect earlier this week, as is a stay-at-home order requiring residents only to leave their homes for essential purposes. The province also declared a second state of emergency.

Ahead of the protest, Toronto police issued a statement posted to Twitter and said they would be present and prepared to respond.

“The COVID-19 pandemic is not just a public health issue; it is a public safety issue,” police said.

“Participating in large gatherings, including protests, is not just in contravention of these orders but also puts attendees and the broader community at risk.”

A few hours later, and as the protest went underway, police issued another statement, saying that they are enhancing their enforcement when it comes to gatherings. Police said they would be dispersing attendees and issuing tickets and summonses when there is evidence of non-compliance.

Both have been charged with common nuisance.

The Main Characters, Ranked From Least To Most Screentime