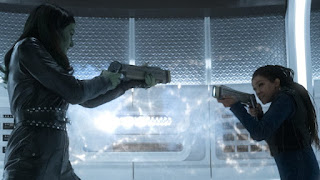 Star Trek: Discovery ends its season with all the promise and potential that it was building towards over the course of its thirteen episodes on a memorable note, pitting Michael against Ossyra as Hugh, Adira and Saru wrestled to find a way to prevent another burn and make it home. This episode may have played it safe and was relatively short on twists and turns that you might have expected going in, but it did allow for a resolution to end on a relatively straightforward note that showcased the series at its best with its character-centric narrative.

The emphasis on connection was illustrated in the previous episode by the division between Stamets and Michael among other factors such as the crew of Discovery working together and That Hope Is You (2) brings together the themes of the season under one banner in a memorable way. It brings up just how important empathy and a shared sense of understanding is, and is why I liked this episode so much. Tilly and the rest of the Discovery bridge crew get their moment to shine in a bid to take back the ship from Ossyra, as although Michael gets all the glory as per usual, the show is a testament to the long-term focus on the strength of these supporting characters. Even the larger role that Detmer has had this season has paid off tenfold, with the characters embracing each other once reunited in a welcoming and touching way. It doesn’t feel self-congratulatory in the slightest and at this point, the bridge crew feel like well-developed, two-dimensional characters that the show has been focusing on getting the most out of. If last week’s episode was their time to shine, That Hope is You is what happens when you stay with them. 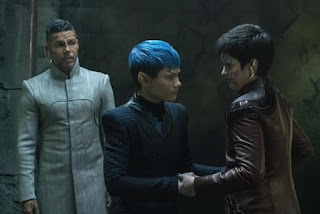 Empathetic connection happens not just on the crew of Discovery but is primarily illustrated through Saru’s storyline and shared bond with Su’kal. He’s able to show Su’kal his real face and encourage him that there is more to life than the simulation, connecting with him in a way that avoids the need for a flashy action sequence. The weight of killing millions is a tough task for any one person to bear and rather than punish Su’kal for that, Saru embraces it, putting an emphasis on hope and optimism that has been the main driving objective of the season. You don’t always need surprises or the stakes to be raised in the finale, and That Hope Is You really excelled with that approach in its arc here. We also got to see Hugh’s encounter with Gray in the flesh, and a brilliant scene between Gray and Adira which gave all three characters, plus Stamets, a mission objective for Season Four: find a way to make Gray visible again. There wasn’t quite enough time to focus on Gray as much as necessary, but hopefully Gray becomes a more important character in Season Four, especially with the departure of major players this season – and all the emotional beats in this episode worked to truly act as a much-needed payoff to the Adira/Gray relationship whilst leaving room for it to progress in completely new dynamics. Truly, the Adira/Gray & Stamets/Hugh dynamics are the most exciting relationship to happen to Star Trek in recent times.

Michael’s mission to retake the ship was the show at its most predictable and traditional, but still fun – Sonequa Martin-Green has been the MVP of this season along with Doug Jones and she’s really been allowed to come into her own in this episode. Everything pretty much worked about as well as you’d expect them to, with the finale seeing the crew of the Discovery earn their new uniforms and become part of the Federation proper – even if the new uniforms are a massive step down from the old ones stylistically, I’m sure they’ll grow on me. There are also a few question marks at the end of the season that I guess Star Trek: Discovery will pick up on in Season Four – Saru’s departure from the ship hopefully isn’t permanent, although it’s hard to see how he fits back into the crew with Michael as Captain. It’s a move that the show has, I think, been building towards from the start, and whilst she’s taken up the leadership role quite often in the past, this makes it official.