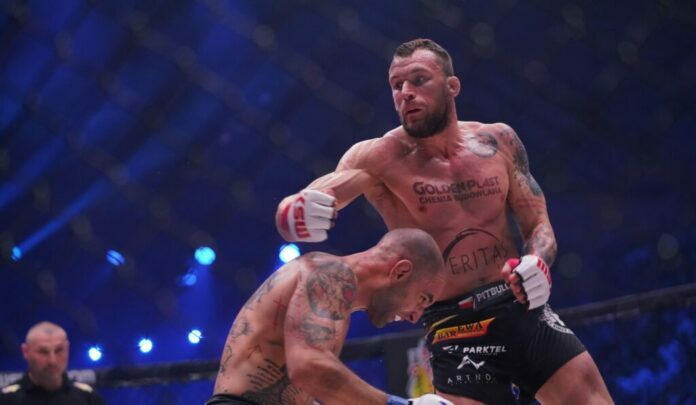 KSW has announced another spectacular bout between two solid European fighters. KSW 58 is set for Saturday, January 30, 2021, in Poland and will feature Mirko Cro Cop protege Aleksandar Rakas taking on multi-time ‘Fight of the Night’ winner Michal Michalski. The two will meet in a welterweight battle of two standout talents. KSW 58 will be shown worldwide on KSWTV and the KSW app.

Michal Michalski (8-4) is coming off of two back-to-back Fight of the Night awards winning by knockout at KSW 48 and KSW 52 respectively. Currently 2-2 inside the KSW cage, Michalski found his groove after dropping his first two appearances in KSW. One of the few contenders yet to have a crack at the champion, Roberto Soldic, a third win in a row could put Michalski in conversations for a future title shot. The welterweight division has a recent handful of new additions making it one of the organization’s most-stacked divisions.

The 31-year-old Polish striker began his professional MMA career in July 2013. After a handful of bouts, Michalski joined Poland’s number two MMA organization, Fight Exclusive Night in 2015. Arguably, 2015 was his best year to date aside from 2019, where Michalski won with two first-round finishes and one unanimous decision. His impressive win streak earned him a shot for the vacant FEN welterweight championship. Michalski suffered defeat to Davy Gallon, who has since also earned the Gladiator Fighting Arena championship, and most recently a knockout victory over UFC veteran Ross Pearson.

Aleksandar Rakas (16-7) was originally scheduled to make his highly-anticipated KSW debut back at KSW 51: Croatia in November 2019 but had to pull out due to injury the day before the matchup. After a long 15 month layoff, Rakas is finally set to return to action and will also be inside the KSW cage. Since October 2018, Rakas has actually only competed once in MMA action. That bout came at Pancrase 309 where he defeated Kenta Takagi by second-round submission.

Rakas, representing the Cro Cop Team, will actually be the second Croatian fighter making their KSW debut. Danijel Bazant will also make his highly anticipated debut against Robert Ruchala. It should also come as no surprise that Rakas is a finisher with 14 of his career 16 wins coming by finish. Waiting on this opportunity for quite some time, Rakas would love nothing more than to burst onto the KSW scene and score a huge knockout victory. His opponent is looking for the same, so look for fireworks in this matchup.

Stay tuned right here at MMA Sucka for more live streams as well as videos highlighting the top fighters, commentators, coaches, promoters and other names in MMA and combat sports. We also bring you great offers on the latest MMA products and merchandise. You can also subscribe to our YouTube channel for regular updates and all the latest fight news. You can also check out our sister site, at TheFightBuzz.com for the latest from the world of MMA and other combat sports.

Pitchbook: the median pre-investment valuation for a Series A round in the US has increased sixfold to $37M since 2010 (Kate Clark/The Information)

Tim Elliott says he bet a “significant amount of money” on himself against Jordan Espinosa, believes loser gets cut