FRISCO, Texas — More than a few minds wandered last week when John Elway stepped down as Denver Broncos general manager. If Elway, who is remaining as the Broncos’ president of football operations, could do that, would Jerry Jones think of doing the same with the Dallas Cowboys?

It has become a question often repeated in the Cowboys’ 25-year run without a Super Bowl championship: Would Jerry, the owner, fire Jerry, the general manager?

The answer then remains the same as it is now: No.

The question also misses a key point in understanding how the Cowboys actually operate.

Access elite coverage for every fan: highlights of the biggest games, original series from NFL legends, unprecedented analysis and more. Sign up now to unlock everything ESPN+ has to offer.

Yes, Jones is the face of the Cowboys’ franchise, one that is the NFL’s most valuable at $5.7 billion, according to Forbes. He appears on 105.3 The Fan radio in Dallas twice a week during the NFL regular season. In a non-pandemic year, Jones would answer questions following wins and losses outside the locker room. He has answered every question thrown his way.

Jones, 78, became emotional when asked on the flagship radio network if he cares more about television ratings, setting attendance records during a pandemic and the Cowboys’ brand.

He said he cares about all three of those things, too — deeply.

“Where the misnomer is that I care any more or less about that than I do making a first down,” Jones said, his voice cracking as he spoke. “That’s where it goes [awry] and that’s where it’s not right. Every chance I’m given an opportunity to trade dollars, or if you will, trade an issue of visibility or an issue of promotion, every chance that I get a chance I go for the first down, every chance — I’ll go back to when I bought the team. That was the most money that had ever come out of anybody’s pocket to get into sport. And, somehow, God willing, I got the spot to do it and I gave every damn bit of it up to buy the Cowboys, because I would rather have that than have the money.”

I have been covering the Cowboys since 2003. I have covered Dallas coaches Bill Parcells, Wade Phillips, Jason Garrett and Mike McCarthy. None of them have said a bad word about how Jones operates the team. Why would they? He paid them a lot of money, but has Parcells held his tongue when it has come to his bosses? Check out his departure from the New England Patriots. Google his relationship with New York Giants general manager George Young.

The perception from outside Dallas headquarters is the Cowboys are something of a circus, with Jones serving as the ringmaster.

“No, I don’t agree with that opinion at all,” McCarthy said last week on 105.3 The Fan. “I really enjoy Jerry and Stephen [Jones]. Their outlook on the NFL, what has been built here with the Dallas Cowboys is unique, strong, powerful. And it’s a tremendous responsibility that I take very seriously. But no, things are very clear on how we want to approach things. The communication is good. They are very respectful to the vision of the football program that I’ve implemented here. I really like the structure … and just the way we operate.

“They are all about winning, but they have a family-first approach and mindset, and that’s something I truly believe in. That’s the way I’ve always coached and installed a football program as a head coach. … The only disappointment I have is that we were 6-10.” 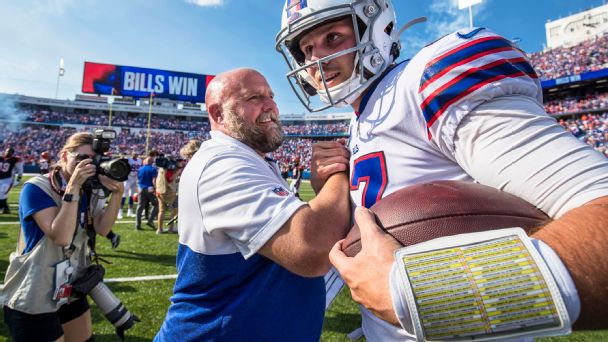 • How Daboll revived Buffalo’s offense
• Insider the mind of Marcus Peters
• What Lurie is thinking on Wentz, Hurts
• Why Jones won’t pull an Elway in Dallas
• How Kamara is always two steps ahead

Yes, Jerry Jones has the final say on matters. It’s his team, his money. Here’s what happens when he makes decisions: he summons the opinions of Stephen Jones (executive vice president), Will McClay (vice president of player personnel), McCarthy, his scouts and staff. Jerry Jones doesn’t just gleefully do whatever he only wants.

Two examples when Jerry Jones didn’t get his way:

We can point to the Cowboys’ decision in 2014 to draft offensive lineman Zack Martin over quarterback Johnny Manziel as proof.

We can point to the Cowboys’ decision in 1998 to pass on drafting wide receiver Randy Moss as proof.

That doesn’t mean Jones doesn’t get what he wants sometimes. Drafting outside linebacker DeMarcus Ware (at No. 11) before defensive end Marcus Spears (at No. 20) in 2005 comes to mind. Signing wide receiver Terrell Owens the next year comes to mind. So does the signing of defensive end Greg Hardy in 2015.

Parcells did not necessarily want Owens, but part of that move was releasing Hall of Fame guard Larry Allen, who did not buy into the coach’s plan. So Parcells got at least one wish. Parcells wanted Ware, but felt he could select him later in the 2005 draft, which would not have happened. But remember, Parcells compared Ware, who became the Cowboys’ franchise leader in sacks (117), to Pro Football Hall of Fame linebacker Lawrence Taylor in the moments after the selection. And there were those in the Cowboys’ building who believed they could work with Hardy, but he had a terrible influence on the team’s younger players and only played 12 games in 2015.

Damien Woody explains that the Cowboys have the worst offense in the NFL since Dak Prescott has been out and says it’s time to change things up in Dallas.

Jerry Jones is not a general manager in the traditional sense, like, say, any other NFL team that employs a general manager. He is not on the road scouting free-agent players and draft prospects throughout the year. He relies on the people he hires to put the information in front of him and they will come to a decision as a group. There might not be full approval every time, but there is a process Jerry Jones and the Cowboys follow.

If there is a flaw in Jones’ approach, it is perhaps listening to too many people, especially outside The Star in Frisco, Texas. He has a handful of former personnel chiefs and executives he will counsel and ask about the Cowboys’ roster. Are those trusted advisers giving him the truth, or are they just reassuring Jerry Jones with what he wants to hear?

Before the 2020 NFL season started, the consensus was the Cowboys had one of the most talented rosters in the league. It wasn’t just Cowboys’ personnel or coaches or league personnel that felt that way. Many talking heads in the media said the same thing.

But then 6-10 happened this season, and now come the calls for Jones to pull an Elway and relinquish his power as general manager.

The answer remains the same: No.

Long-term care minister was ‘ahead’ of top public health doctor on COVID-19: commission