That’s all from us folks! Do join us tomorrow to see if Sri Lanka can spring in a surprise. Tata …

At the start of the second day, South Africa looked set to bat just once in the second Test. The bowlers had shot down Sri Lanka for 157 and they were trailing by just nine before the start of play. By the time the stumps were drawn, Sri Lanka had put themselves in a position to sow some doubts in the minds of the South African batsmen.

In the opening hour, the Sri Lankan pacers looked lost and out of ideas. Dean Elgar, who started the day unbeaten on 92, eased to his 13th Test in the fifth over off 133 deliveries. Rassie van der Dussen, who had taken 26 deliveries to get off the mark on day one, eased to his half-century in the next over. As both South African batsmen cashed in, Sri Lankan fielders let the bowlers down. Misfields were followed by Kusal Mendis dropping van der Dussen at second slip.

Elgar and van der Dussen stretched their association to 184 before Dushmanth Chameera struck. Elgar hung his bat out to a length delivery and was caught at slips. That was the opening Sri Lanka needed as the hosts went from 218 for 1 to 218 for 3 with van der Dussen following his partner. South Africa ended the session on 241 for 5 with Dasun Shanaka bagging two and helping the team find the lost mojo.

After the break, Vishwa dismissed Wiaan Mulder on the second ball of the session to give the visitors another promising start. Elgar’s wicket had led to a meltdown as South Africa lost their last nine wickets for just 84 runs. Lungi Ngidi and Lutho Sipamla frustrated Sri Lanka for 31 deliveries before Vishwa dismissed the latter to complete his five-wicket haul.

Even with a sizeable lead, South Africa would have felt comfortable in tightening the noose. Ngidi landed the first blow when he knocked over Kusal Perera in the third over. Lahiru Thirimanne and Karunaratne saw things through to the Tea break and returned to slowly build Sri Lanka’s chances. They made 85 for the second wicket and also managed to frustrate the likes of Ngidi and Mulder.

While Thirimanne lived on the edge a bit, Karunaratne looked solid to hold one end up. It was Ngidi who provided the second break when he strangled Thirimanne down the leg side. He then dismissed Kusal Mendis on his next delivery – again a strangle down the leg side – to give South Africa some home of hurting Sri Lanka. Debutant Minod Bhanuka looked troubled against the short ball and succumbed to one from Anrich Nortje as Sri Lanka nosedived to 109 for 4 from 86 for 1.

Dickwella and Karunaratne scored unbeaten 41 off 69 to take the side into the lead but will be well aware that one misstep and the hosts will once again pin them on the mat. 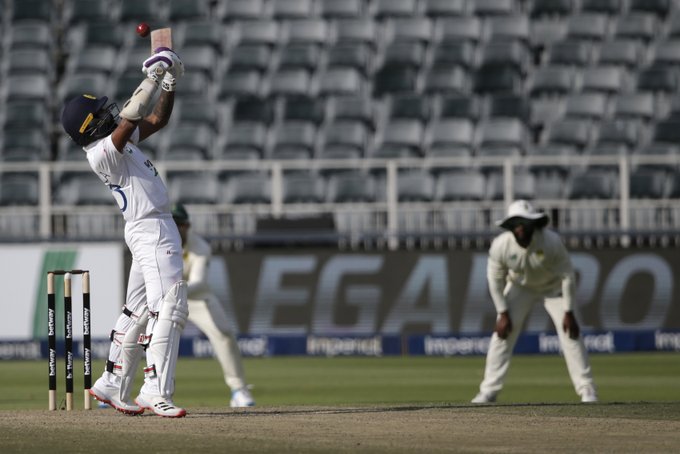 Debutant Bhanuka looked uncomfortable against the short deliveries and falls to one. Outside off and banged by Nortje. He goes for the pull and the ball went wide of mid-on. Maharaj made good ground and completed a diving catch.

Kusal Mendis bags a pair in this Test. Down the leg side and Mendis flicked it very fine. De Kock dived and caught it to give Ngidi two in two.

Thirimanne has gloved one to the ‘keeper down the leg side. Back of length and it climbed on the left-hander. Took the glove as he was looking to work it on the on side.

Karunaratne has bagged a half-century to ensure Sri Lanka keep fighting on the second day. He’s now added 85 with Thirimanne for the second wicket after the early fall of Kusal Perera.

Vishwa Fernando bagged his maiden five-wicket haul to keep South Africa to 302 in the second session on day two. The hosts, however, built a lead of 145 and will be comfortable with the runs in the bank especially with the track starting to play tricks with the odd ball kicking off from the surface.

Sri Lanka, though, didn’t the perfect session they were hoping for as they lost Kusal Perera early and ended with 16 for 1 on the board. Both Dimuth Karunaratne and Lahiru Thirimanne lived dangerously but managed to escape unhurt in the nine overs the visitors had to bat.

The story of the session however was South Africa’s collapse. From the comfort of being 218 for 1 in the opening session with two set batsmen, they ended the opening session on 256 for 5. There wasn’t much lower-order resistance as well as they eventually lost their last five wickets for just 61. Fernando gave the visitors a breakthrough on the second ball of the post-Lunch session as he trapped Wiaan Mulder in front to bag his second wicket.

Keshav Maharaj fell to Asitha Fernando but the big wicket came in the 68th over when Temba Bavuma had a brain freeze. Vishwa was trying to bring in all his deliveries from around the wicket and the right-hander decided to offer no shot. Plumb in front, Bavuma tried his luck with a review and failed there as well. Lungi Ngidi and Lutho Sipamla scored just 19 for the final wicket but managed to frustrate Sri Lanka for 37 deliveries. Vishwa completed his five-wicket haul when Sipamla’s outside edge landed with Dasun Shanaka at second slip.

Kusal Perera did the bulk of the scoring on the opening day but Ngidi has found a way to breach his defence early on in the second innings. Around the wicket from the pacer, nips in and crashes into the stump.

Vishwa Fernando bags his maiden five-wicket haul with the wicket of Sipamla. Outside edge and caught at slips. South Africa have a lead of 145 and it the performance of the Sri Lankan batsmen is anything to go by on the opening day, it should be enough for a win.

Nortje gets done by the angle this time. Length ball outside off and leaving the batsman. He wanted to play it straight but gets an outside edge. Caught at second slip.

What piece of terrible judgement from South Africa’s last recognised batsman. Around the wicket and Vishwa Fernando is trying to bring the ball back. Bavuma decided to shoulder arms and was trapped in front. Took a review hoping for a slice of luck. Three reds.

Wicket for the other Fernando

Sri Lanka strike on the second ball after the break. Vishwa Fernando gets his second and has trapped Mulder in front. The batsmen did review but was sent on his way back. South Africa have pushed their lead past 100 though.

After handing the ascendancy to South Africa on the opening day, Sri Lanka landed several blows late in the opening session on the second day to pull things back. South Africa went to Lunch at 256 for 5 with a lead of 99 and scored 108 in the session. However, in what was turning out to be a largely uneventful session, Sri Lanka bagged four wickets to stage a comeback of sorts.

The day started with the Sri Lankan bowlers dishing out several half-volleys for both Dean Elgar and Rassie van der Dussen to take advantage of. Elgar eased to this 13th Test ton off 133 deliveries in the 42nd over. In the next over, van der Dussen drove one past the bowler to complete his half-century as the duo pushed South Africa into the lead.

While the Sri Lankan bowler lacked bite, they lacked support from their fielders as well. Van der Dussen was dropped at second slip by Kusal Mendis just before he completed his half-century. The duo extended their association to 184 but a nothing shot from Elgar gave Sri Lankan an opening. Dushmantha Chameera floated one on length and Elgar hung his bat out to edge the ball to first slip. The score went from 218 for 1 to 218 for 3 as van der Dussen fell to another poorly executed stroke. The length ball down the leg side from Dasun Shanaka was gloved to the ‘keeper by the right-hander as he fell for 67.

Shanaka had more fire in his belly as he nipped out Faf du Plessis by opening him with a delivery that left him from length. Quinton de Kock fell to Vishwa Fernando for 10 as South Africa slipped to 241 for 5. The hosts, however, have a sizeable lead and will aim to build on that. While the Sri Lankan bowlers have come to the party, apprehensions remain if their batsmen will join especially after their poor show on the opening day.

Vishwa Fernando joins the party now with the wicket of Quinton de Kock. South Africa are in a nosedive and Sri Lanka are landing the blows just at the right time. Just 10 for the South Africa captain. Lead now 84.

Third wicket down in the session for South Africa. Du Plessis falls to Shanaka. He opened up the right-hander and the former captain was stuck to his crease. Dickwella completes the catch. Lead now 78.

Van der Dussen will be kicking himself. Back of length ball down the leg side and he went for the half pull. Gloved it to the ‘keeper and stood his ground. The appeal was turned down by Sri Lanka challenged it. They get their second wicket of the day. Faf du Plessis and Quinton de Kock out now.

Dean Elgar has fallen for 127. Dushmantha Chameera breaks the 184-run stand. A nothing shot really. Length ball outside off and he hung his bat out. The outside edge flew to Thirimanne, who grabbed it with ease.

Terrible review from Sri Lanka. Vishwa Fernando gets the ball to swing in and van der Dussen missed the flick. The appeal was turned down and they decided to challenge it. The ball was missing leg stump by some distance.

Now van der Dussen gets to his half-century off 98 balls. Full and straight, driven down the ground for a boundary. He’ll hope to convert his lucky escape into a big one. Lead is now 19.

Century No. 13 for Dean Elgar. As easy as they come. Sri Lankan attack isn’t the most threatening but Elgar has been extremely impressive with his shot selection and decision making. Gets to the landmark off 133 balls. The partnership between him and van der Dussen now 136. Not to forget, Sri Lanka have managed to drop the latter early in the session.

Alrighty then, Elgar and van der Dussen are out there. Sri Lanka fielders out to ‘fight’ as well. What will be South Africa’s lead at the end of the first session? 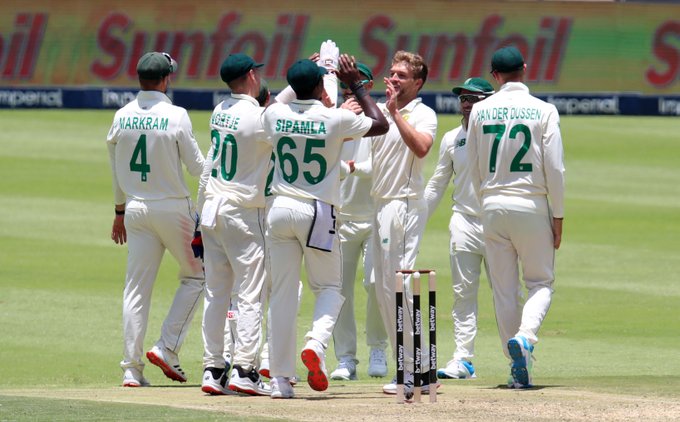 Sri Lanka, after their mauling in Centurion, were expected to show fight. Instead, they chose to take flight. Their mindset was to get out of the country as soon as possible even if it meant losing the contest. Shot down for 157 in 40.3 overs, they saw South Africa boss the opening day and make 148 for 1.

Dean Elgar is unbeaten on 92 and will aim for a century. Do Sri Lanka have a way back in the contest? Highly unlikely.

Q&A with Twitter's senior director of curation Joanna Geary on how her team decides which trends to summarize and how to contextualize them, more (Will Oremus/OneZero )

Bale and Hojbjerg out, Winks starts – The Tottenham team Mourinho should pick vs Crystal Palace