What do you think of when it comes to the topic of gaming on a phone? For many of us that means casual gaming, occasionally getting into 3D titles, flashy graphics, and online competition.

A growing number of people are starting to have a different definition of mobile gaming. In fact, the last few years have given way to a whole new segment of hardware: phones designed around gaming.

These types of phones are often cutting-edge hardware, feature extra buttons, and custom software settings. They usually have incredibly high refresh rates for the screens, massive batteries, and even cooling systems.

Blu’s latest handset is the G90 Pro, which it touts as its first “gaming phone”. Available immediately, it’s a $250 handset that launches with an introductory discount. As it does with many of its other models, Blu has knocked $50 off the phone for a limited time. That’s right, just $200. 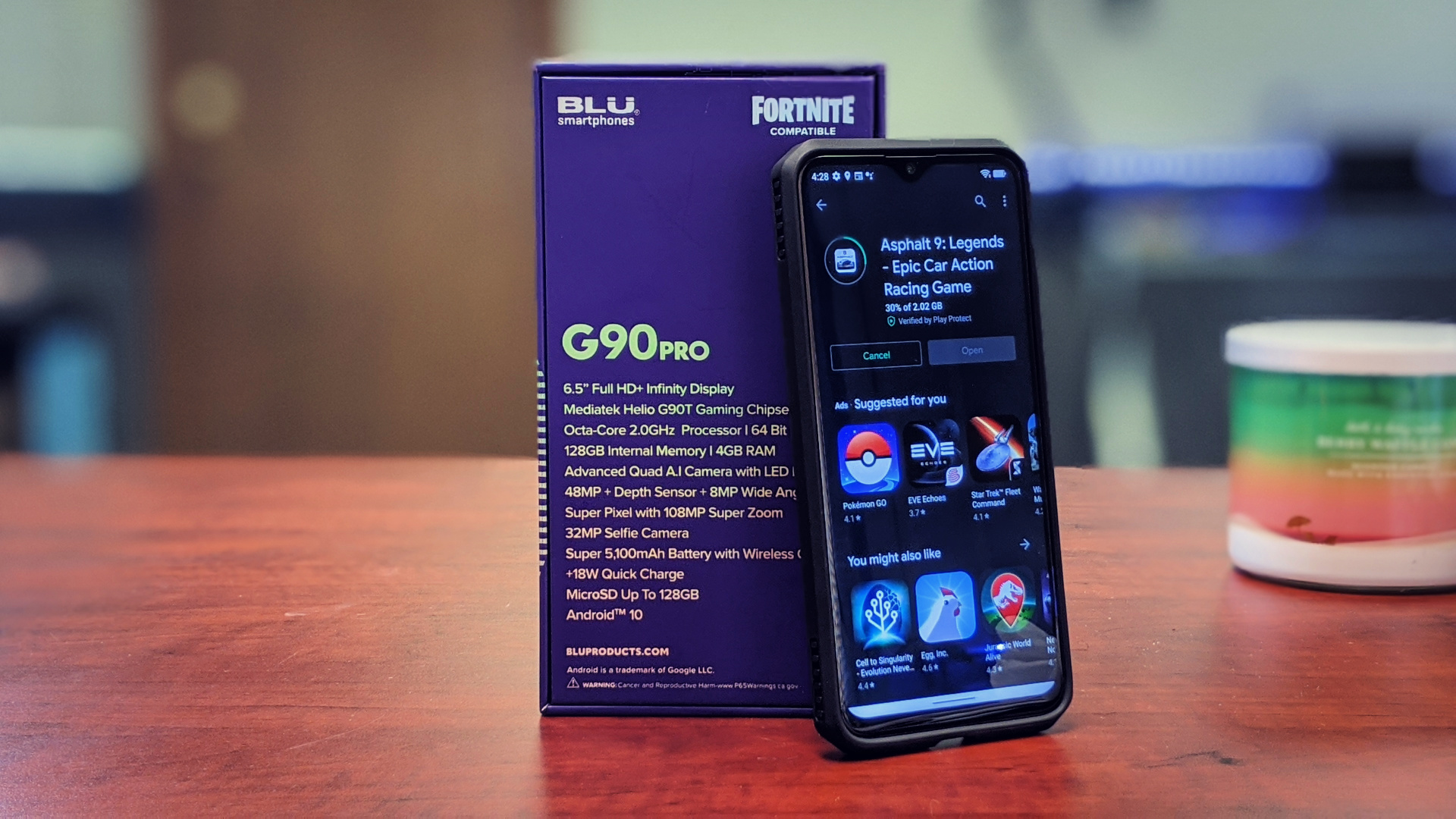 I’ll get right to the point. The more time I spent with the G90 Pro the less I thought about it as a gaming phone. That’s largely, but not entirely, because I am not the target gamer.

Looking at the device from a hardware standpoint, the phone resembles other Blu models in its portfolio. It’s sleek, shiny, and sophisticated looking, but there’s nothing on the surface that signals a gaming-centric experience.

Offered in “Purple Haze”, the G90 Pro is a modern looking device that has the appearance of a more expensive handset. And just like everything else in its roster, it’s unlocked and compatible with GSM carriers. In other words, T-Mobile, AT&T, and any of their respective brands can support the phone.

As to where the G90 Pro fits in line with its other models, we’ll want to back up a bit. See, there’s an entry-level G9 which launched last summer with a price tag of around $180. A few months later Blu offered up the G9 Pro, a beefier and sexier take that topped out at $250. 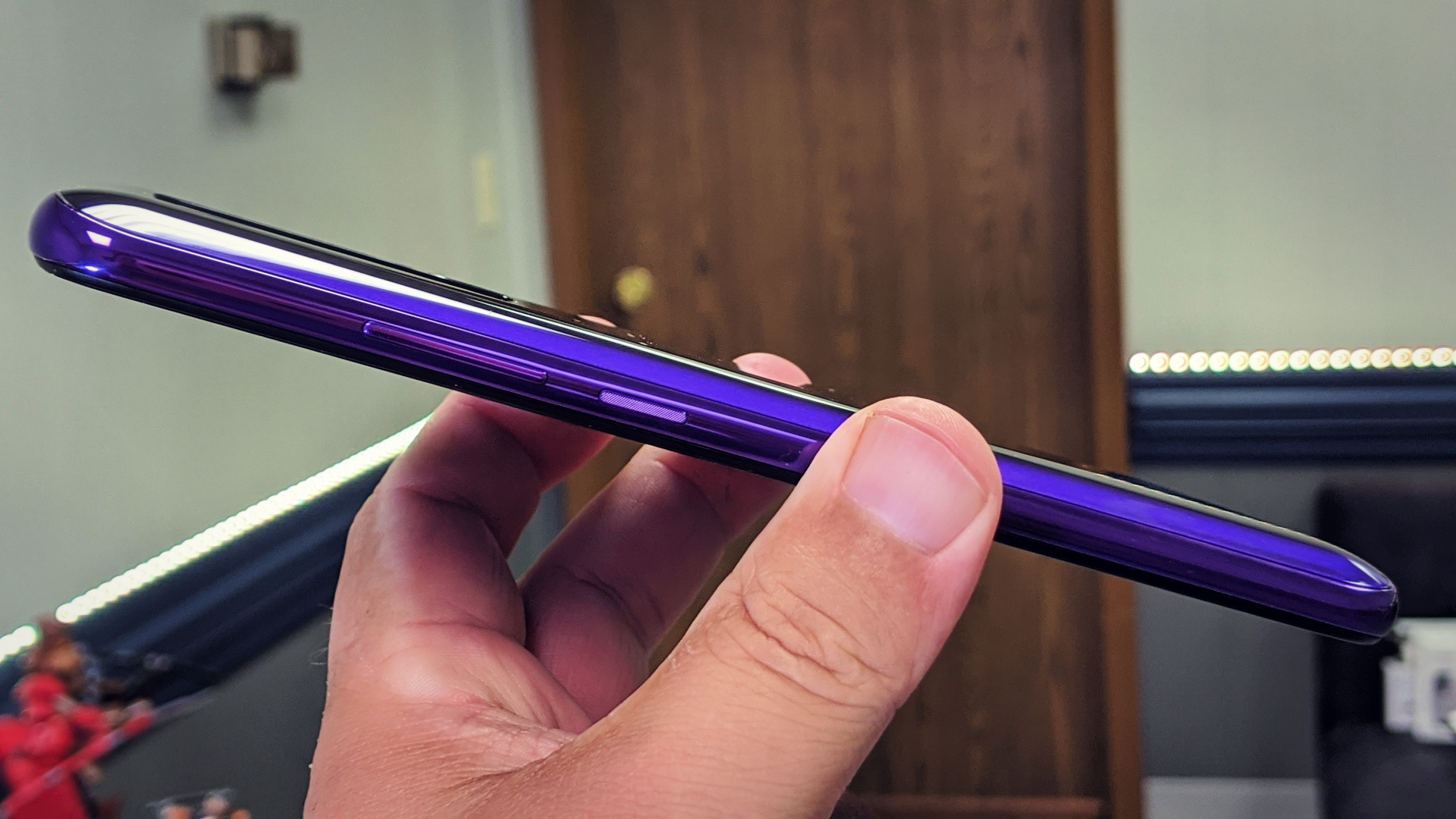 For 2020 it seems to be following a similar path; the G90 ($150) arrived in June with a refreshed entry-level experience. And that brings us to today with the arrival of the G90 Pro.

If you view the phone through the same lens as last year, the G90 Pro makes sense. It’s easy to understand what it represents and where it fits. But, we have to apply a different lens: gaming.

Let’s take a look at the hardware and overall design of the Blu G90 Pro. There’s quite a bit packed into this phone, especially for the price.

Down the spine of the phone is the camera array which is comprised of an 8-megapixel wide-angle (118-degree) camera, 48-megapixel main camera, and 2-megapixel depth sensor. Just to the side are the flash and a 2-megapixel macro camera.

A quad-core processor is paired with 4GB RAM with storage capacity at 128GB. A microSD expansion card slot allows for another 128GB of media, files, music, and data.

The 5,100mAh battery is larger than what’s found in most of today’s phones, even at the upper tier. Topping off the power source is done via USB type-C 18W quick charging and /or 10W wireless charging. 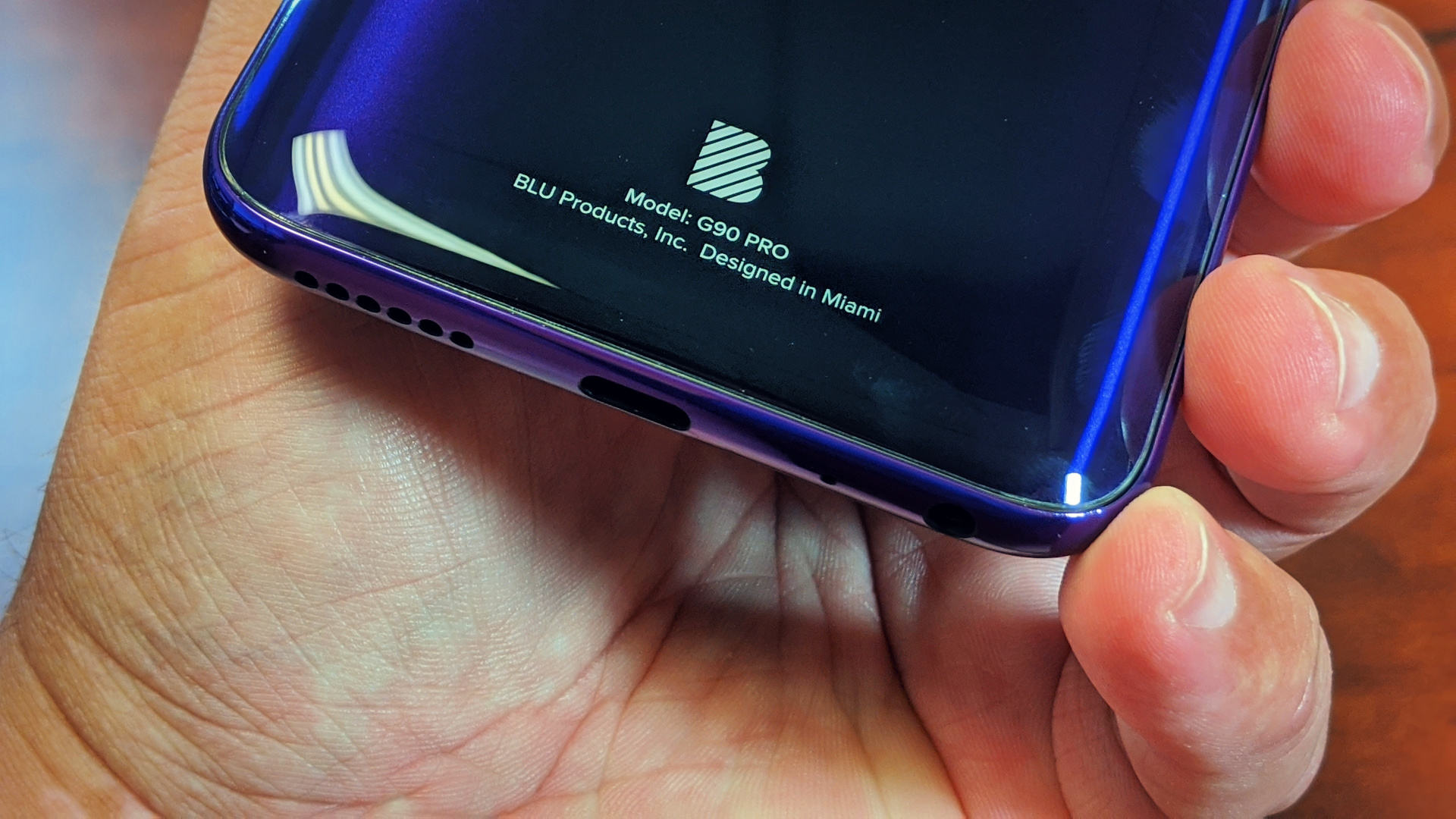 Rounding out specifications we have Bluetooth 4.1, a rear fingerprint sensor, facial recognition, and a 3.5mm headphone jack.

Design-wise, the G90 Pro has your standard layout with power and volume buttons located on the right edge. The left side is where you’ll find the microSD/SIM card slot. The bottom has the USB Type-C port, speaker, and headphone jack.

The phone is heavy and slippery, to be sure. We can thank the large screen and batteries for that. As beautiful as the purple is, it likes to attract fingerprints and smudges.

The Blu G90 Pro leaves Android the way Google intended it to be enjoyed, adding just a few extras here and there. Nothing that impacts the UI or slows any potential software update, mind you.

I like when phone makers do this, and I’m glad to see more companies adopting the mentality. Blu has done this for years and seems to have found the right blend of additional features. Present are features like dark theme, color modes, configurable gestures, and choice of navigation bar settings. Digging into things, you can really adjust the experience to your liking.

While it doesn’t look like there are any additional apps or games installed out of the box, a few things show up once connected to Wi-Fi. Candy Crush Saga, Coin Master, Pandora, TikTok, and VivaLive TV were among those that installed on ours. For what it’s worth, they can be uninstalled.

Interestingly, there are no settings present for tuning the phone. It surprised me to find there were no adjustments to adjust color gamut, refresh rates, automatic do-not-disturb, or battery optimization. These are often found in higher-end phones, and especially those with gaming at their core.

So, how does the Blu G90 Pro handle gaming? Not too shabby, considering the hardware. Let’s be honest here; this phone doesn’t have near the specifications that other “gaming” handsets include.

Whereas something like the ASUS ROG Phone II has up to 12GB RAM, this one has 4GB RAM. Similarly, there are big differences in the display refresh rate, storage capacity and type, and processor type.

In all fairness to the processor, the MediaTek Helio G90T is designed and tuned for gaming and there is “Liquid Cool Technology” at play here.

Other gaming-based phones tend to push the boundary with bleeding-edge technology like UFS so I had hoped that would be what Blu did for its G90 Pro. Well, as long as they were going to call it a “gaming” phone. 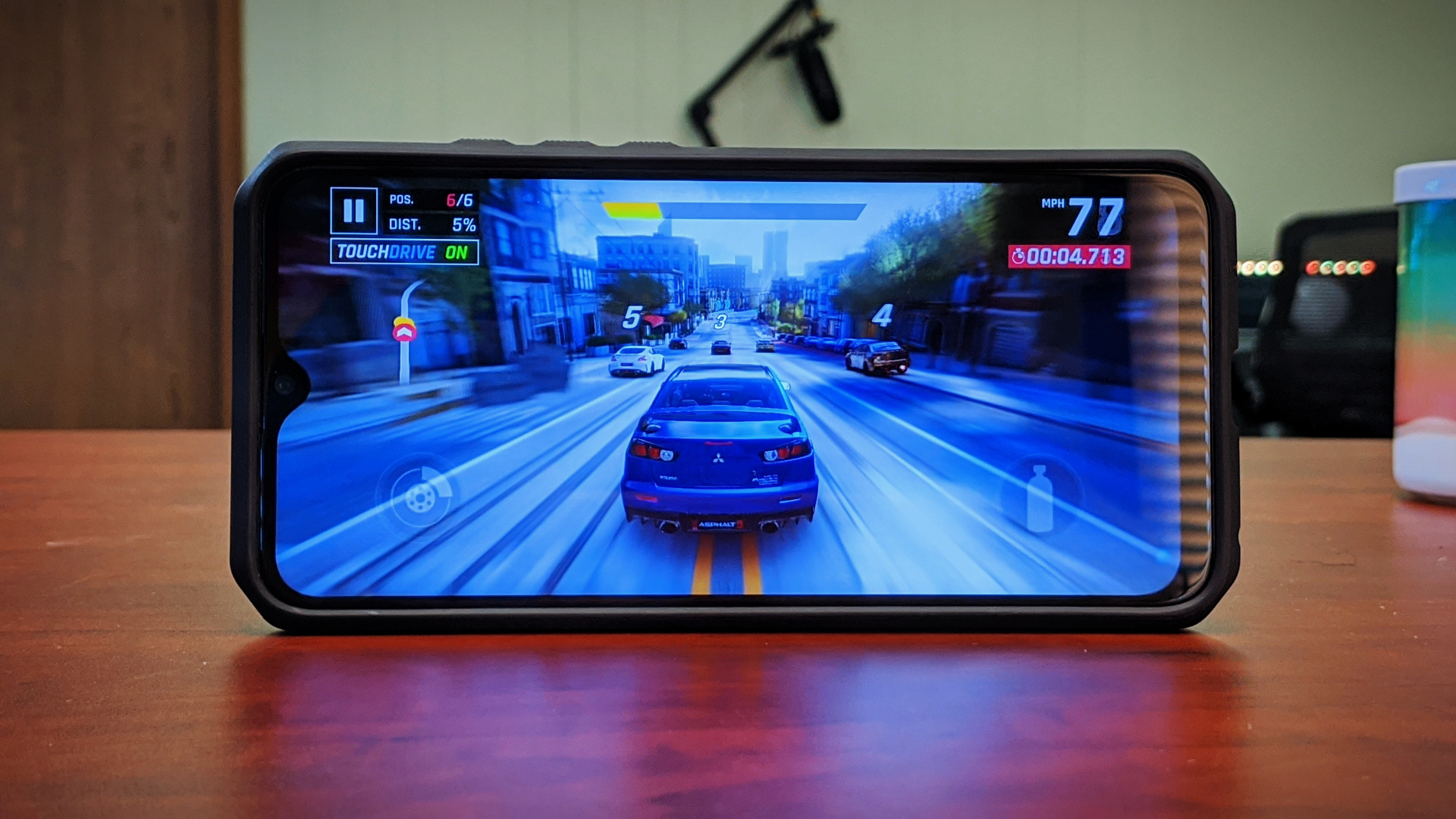 I loaded up Asphalt 9, Grand Theft Auto: Vice City, and NBA 2K20 to see how things went. Each played as expected with no noticeable lag or stuttering. To be clear, I didn’t run any benchmarks for frame dropping.

I’m more of a Pokemon Go, Monument Valley, Blendoku, and solitaire kind of mobile gamer. Save for Pokemon Go, I like to play a few minutes here and there and often leave games unattended for days or weeks at a time. I had zero issues with any of the games I normally play on a phone.

Hopping from one game to another, or pausing for a bit to manage emails and tasks, I found the G90 Pro to move smoothly along. I’ve lived with the Pixel 3a as my main phone for more than a year now. In other words I don’t need, let alone want, much from a phone.

This is not to suggest I don’t have experience with much more powerful phones. Today I carry a OnePlus 8 Pro with me everywhere I go, and often spend evenings with that one. I love using it for a few games and video.

I’ve really come to appreciate a higher refresh rate even though I don’t use it all that much. Things are buttery smooth and move so much clearer when your screen is refreshing at 90Hz or 120Hz.

As I see it, those who buy devices based on benchmarks and performance tests already have their eye set on particular products. They do their research, compare apples to apples, and often base their purchasing decisions more on what the product does as opposed to what it costs.

The G90 Pro doesn’t have anything special in way of the refresh rate. There is one speaker on the bottom so sound isn’t stereo or exceedingly loud. And unlike the ROG Phone II and its side-mounted USB-C port, this one’s on the bottom. Playing games sometimes results in covering the sound or an awkward experience with headphones plugged in. Thankfully, the G90 Pro comes with a protective rubber case, and not just the same thin TPU one that comes with other Blu devices. Here we get one that’s more rough and tumble, with an ergonomic design on the rear. It lends itself to a more natural handheld experience and its cutouts help keep your phone cooler when long gaming sessions take place.

Interestingly, the camera experience is quite well-rounded and better than expected. I say this not only from what I found in actual usage, but in the fact that there are so many cameras present to begin with.

Do gamers care that much about taking photos? I submit that they likely don’t. Nevertheless, I think casual users will enjoy what’s offered up here.

I don’t know that I’ve properly conveyed my sentiment regarding this phone and its place among gaming devices. Had Blu not introduced it as “its first gaming phone” I would have had a different perspective of the G90 Pro. 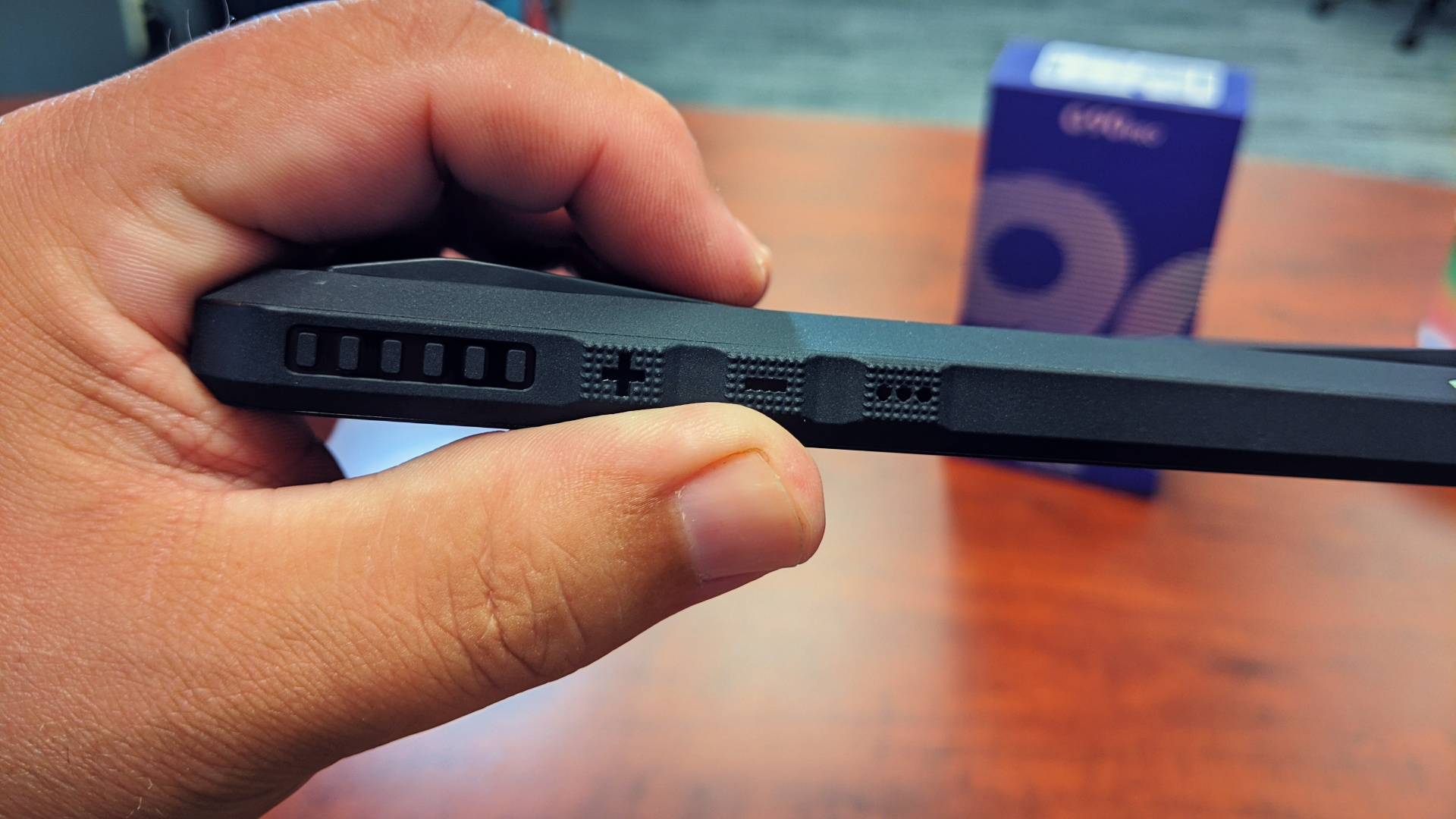 Once that topic was injected into the conversation things changed. Now we’re not talking about how it fares as a regular phone but more of a specialized one. And given there are not too many devices on the market with that as their angle, it stands to reason that comparisons need to be made.

As indicated earlier, I’m not a heavy gamer when it comes to my mobile lifestyle. That doesn’t mean, however, that I am not aware of what a gaming phone offers. I went in looking for certain things and came away disappointed.

I feel like I am being overly critical of the phone itself. I’m trying not to be. Had this been introduced as simply a Pro version of this summer’s G90 I would have been far more impressed.

I’ve always had the opinion that Blu’s phones are perfectly serviceable and worth their money — at the very least. It offers great value propositions and any flaws or shortcomings are often overlooked, if not forgiven. And really, it’s not until you compare Blu phones with more pricey competitors that you see what corners may have been cut or concessions made. I stand by every bit of that here.

On its own, the G90 Pro is fantastic and even fares well when compared to others. But add that one topic to the mix and suddenly it doesn’t belong in that conversation. 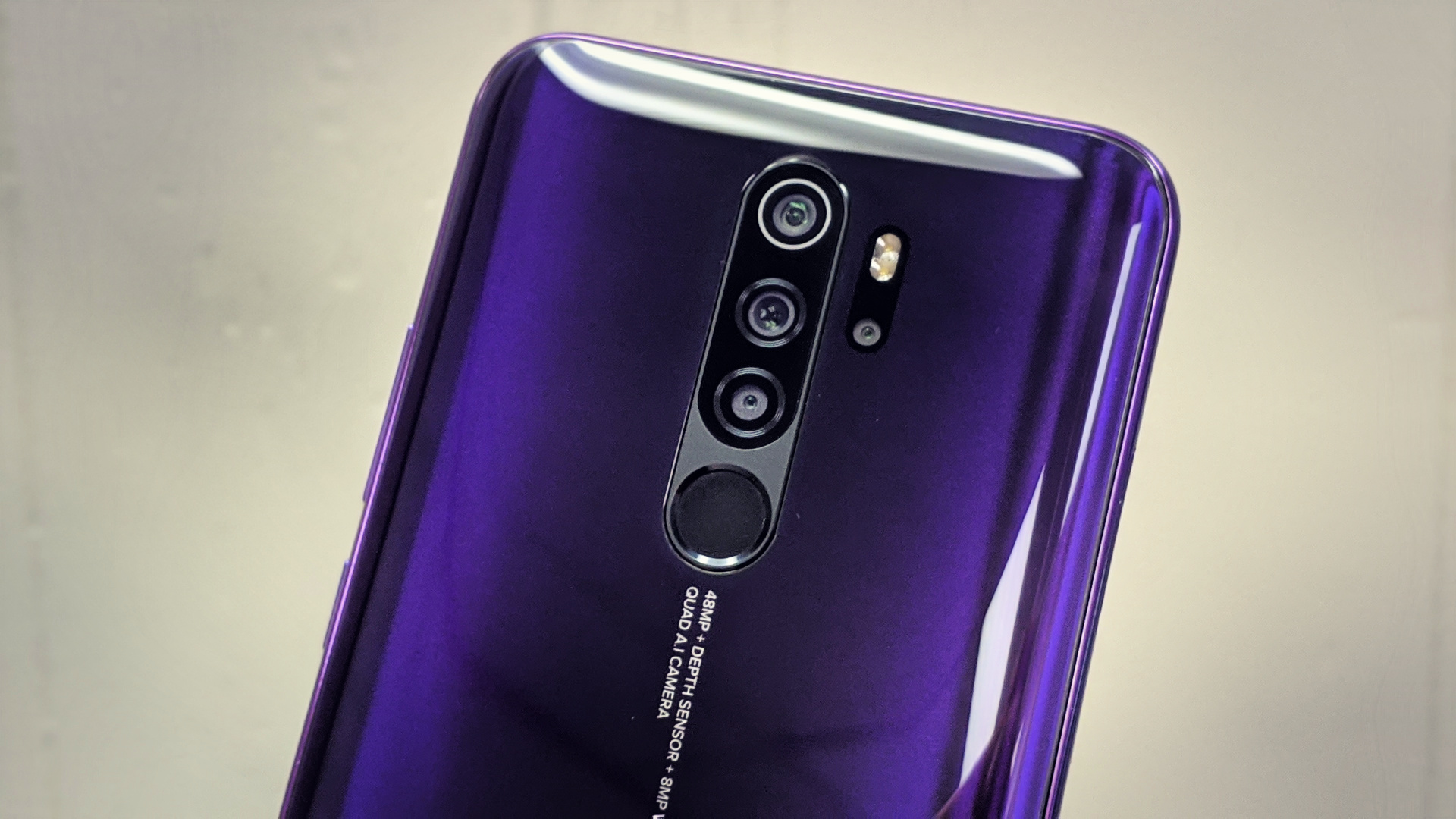 I really dig this phone for $250, and simply love it at just $200. If you can get in on the limited-time discount, I suggest doing so. It’s a great update over last year’s model and provides the right balance of features to keep most folks happy for a few years.

There’s enough price disparity here before we start comparing the G90 Pro to something like the Pixel 4a. It’s more closely aligned with the likes of Motorola’s 8th-gen G series or the Samsung Galaxy A31.

It’s in an interesting spot where you don’t start comparing it to bigger names, and at the same time, you don’t turn your nose at it for being too basic.

There’s a lot to appreciate here, but I just wouldn’t lead the conversation with gaming. And even though there is a huge segment of buyers just like me, true gamers are a different breed. As such, they’ll take one look at the spec sheet here and move on.

If you saw this phone displayed at Best Buy, or came across it on Amazon, you’d find it outwardly attractive with a pandemic-friendly (read: affordable) price. Unlocked and ready for GSM carriers, it’s a solid handset with more than enough power for most users. If your definition of mobile gaming resembles mine, you’ll be sufficiently impressed.

You can purchase the Blu G90 Pro for $250 at Amazon where it’s available in Purple Haze. An introductory launch price sees the phone going for just $200 for a limited time.

Note: Select outbound links may include affiliate tracking codes. Revenue generated from any potential purchases is used to fund AndroidGuys. Read our policy.

Salman Khan to have a grand entry in Pathan