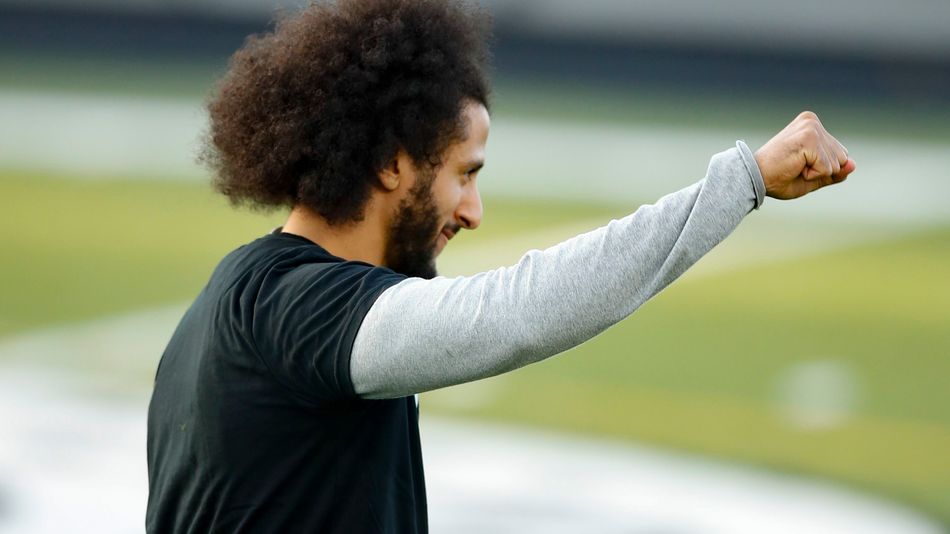 The NFL would like to apologize for ignoring players who have protested police violence and racial inequality since 2016. There’s just one problem: Colin Kaepernick is still being erased.

We, the NFL, condemn racism and the systematic oppression of Black People. We, the NFL, admit we were wrong for not listening to NFL players earlier and encourage all to speak out and peacefully protest. We, the NFL, believe Black Lives Matter. #InspireChange pic.twitter.com/ENWQP8A0sv

It’s a nice enough statement if you’re willing to overlook the fact that it’s coming four years late, and pointedly ignores the man responsible for getting players to protest. It is a well-known fact now that Kaepernick, the former San Francisco 49ers quarterback, put the spotlight on the NFL in 2016 when he started kneeling during the pre-game national anthem.

Over the years, Kaep’s critics have embraced a bad faith framing of the protest being an intentional act of disrespect toward the American flag, and by extension U.S. troops. That’s a lie, plain and simple. Kaepernick spelled out his intent very clearly in 2016.

“I am not going to stand up to show pride in a flag for a country that oppresses black people and people of color,” he told the media arm of the NFL. “To me, this is bigger than football and it would be selfish on my part to look the other way. There are bodies in the street and people getting paid leave and getting away with murder.”

Just a few days after those quotes surfaced, Kaepernick pointed out that his protest isn’t a show of disrespect for the flag or for U.S. troops, as many had leapt to assuming. “I have great respect for men and women that have fought for this country,” he said during a press conference, as reported by Sports Illustrated. People who listened and took the man at his word actually got it.

Unfortunately, the NFL wasn’t among those who listened. Kaepernick played through the season and then opted out of his contract ahead of the 2017 season. No team stepped up to sign the promising young quarterback, leading to suspicions that he’d fallen victim to a coordinated effort to keep him from playing professionally again. That suspicion eventually gave way to a lawsuit, which the league settled in 2019.

Even after that, and with Kaepernick expressing a continued interest in playing professionally, no team would have him. All throughout, both before and after the lawsuit, the league’s handling of Kaepernick, whose protest caught the eye and ire of Donald Trump early in his first term, was marked by unusual events.

There was, for example, the very strange moment when Kaep’s name was removed from a song on the Madden NFL 19 video game’s soundtrack. On the YG track “Big Bank” during Big Sean’s guest verse, a direct reference to the former 49er by name was censored out.

The next year, months after the lawsuit had settled and midway through the 2019-2020 season, there was supposed to be a confidential NFL-sanctified workout session for Kaepernick. A moment when he could show the league that he was still up to the challenge of playing professionally.

Unfortunately, the whole thing fell apart at the last minute. There’s a lengthy story behind the undoing of the workout, but it boils down to two major points of contention: a liability waiver from the NFL that Kaepernick refused to sign due to disagreements over the waiver’s outside-the-norm demands, and the fact that the league went public with the workout despite prior discussion to the contrary.

There are other examples, including the league’s efforts to stamp out all acts of protest in a post-Kaepernick world, but you should see a picture forming here. Outwardly, the league stuck to a company line of Kaepernick being a free agent. But the reality was that Kaepernick, a proven talent, failed again and again to generate any traction with quarterback-hungry teams.

Even now, in the midst of all the unrest and what could accurately be described as a more mainstream recognition of the systemic racism that’s plagued the United States since its birth, the NFL sticks to that line. On May 30, league spokesperson Joe Lockhart suggested that the Minnesota Vikings should have signed Kaep in 2017.

He then added: “Colin is a free agent. Clubs may sign him if they choose to do so.”

Lockhart was doing the press rounds in the aftermath of the NFL’s initial response to the current round of protests. Many saw the statement, which expressed solidarity with Black Lives Matter and acknowledged the country’s deeply rooted racism, as deeply hypocritical. The statement made no mention of Kaepernick, no mention of player protests of any kind.

Days later, a group of prominent NFL players released a powerful video in which they expressed solidarity with Black Lives Matter. The video was a direct response to the NFL’s May 30 statement.

The video provides the NFL with a blueprint, from the players, for a statement on current events that isn’t openly hypocritical and ignorant of the league’s own recent struggles with systemic oppression. Goodell’s video statement, which arrived the very next day, is an almost word-for-word reproduction.

Unfortunately, the league didn’t take the obvious next step of naming Kaepernick. He’s a victim of the same system of oppression that’s made COVID-19 (and the ensuing economic destruction) a greater threat to black Americans. It’s also the same system that killed George Floyd, Breonna Taylor, Ahmaud Arbery, and a heartbreakingly long list of others. Kaep kept his life and leveraged his platform to find success in other ways, but he lost the career that he apparently loved.

For years, the NFL has gone out of its way to passive-aggressively erase Kaepernick from the narrative around the protests that he himself started. That erasure continued on Friday with Goodell’s statement.

The league clearly still has a lot to learn.